The process of preparing and serving a cup of coffee comes in stages and often, the quality of the product suffers because of mishandling. The same thing can be said about nitro coffee preparation, sometimes mishandling affects its taste, nutritional value, and shelf life.

Nitro coffee is teeming with antioxidants, nutrients that are sensitive to oxygen exposure. It’s so easy to ruin a perfectly prepared cup of nitrogen coffee with a simple mistake in preparing or serving. And contrary to popular notion, nitro coffee is not only served cold, it’s possible to enjoy nitro coffee as a hot drink!

Here at Bona Fide Nitro Coffee, we’ve developed a game-changing process to preserve the flavor and quality of our coffee keg while also making preparation and serving easier for customers. It’s called the Craft Draft process and it’s one revolutionary way of serving nitro coffee - hot and cold! 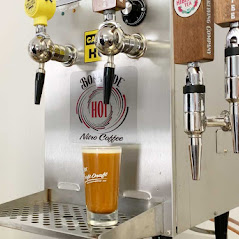 What is the Craft Draft Process?

Our founder has developed the Craft Draft Process to eliminate all factors that make bad-tasting coffee, well, bad tasting. The process maintains the freshness of the nitro coffee and preserves its taste so you get to enjoy the flavor of the coffee in the way that our brewmasters intended.

What’s more, the Craft Draft Process allows you to serve nitro coffee as a hot drink and do so on-demand. Imagine serving nitro coffee within seconds, no further prep needed!

The craft draft process involves storing the nitro coffee in the same way as artisanal or craft beer, in a keg or kegerator. The Bona Fide nitro coffee is brewed in advance, at the peak of its freshness, and then stored in a keg. Then, the brew is pressurized with pure nitrogen gas and then sealed. Once the kegs are transported to our customers, the coffee is dispensed the same way as craft beer - on tap.

Why Serve Nitro Coffee in Kegs?

The beauty of storing and serving nitro coffee in kegs is that the brew is kept in a protective container, free from elements that could ruin its taste and quality. Nitro Coffee, unlike your average, mass-produced coffee, is highly sensitive to oxygen. The kegs keep the elements out to retain the highest quality and flavors of the brew. Think of the keg as a protective shell that makes good coffee taste even better, for longer!

Also, the keg makes it easier to serve your favorite drink with less mess. Just set the keg up, pull the tab and you have hot or cold nitro coffee on demand. This makes coffee preparation and storage far simpler and more convenient. This feature is very beneficial for your business, customers don’t have to wait so long to get their caffeine fix.

The brew is also pasteurized, all the pathogens that could otherwise contaminate the drink, have been eliminated for your safety. And since the brew is pasteurized and the keg keeps the brew clean and fresh, it has a longer shelf life - the longest in any other nitro brew on the market right now. What’s more, the keg eliminates contact between the server and the brew, ensuring zero cross-contamination.

Serving hot nitro coffee may be new to those who are used to their cold brew but you’d be surprised how the kegerator revolutionized the way we serve nitro coffee. It changed the game of hot coffee preparation and serving, that’s for sure!