A bag-in-box (BIB) is a container made from a combination of cardboard and flexible packaging. Inside, is a barrier bag (or bladder). It is fitted in an exterior cardboard box which protects it. There is a connection fitting welded to the bag and an access a hole in the outer cardboard box where a beverage machine can be connected to the BIB. A pump from the machine, sucks product out of the BIB and delivers it to the dispensing head, where it gets diluted with water (and in some machines chilled) before getting dispensed into the cup. As it gets dispensed, the bag inside the box collapses and once its empty it leaves behind an easy to dispose of package.  Since laminated barrier bags are usually not recyclable and the cardboard is, these two pieces can be separated and correctly disposed of with ease.

Additionally, BIB containers are rectangular which makes them easy to ship, store and handle. Due to their low cost, they are often used to package soft drink syrup and other beverages. However, with the development of better barrier materials some producers are packaging wine and liquid coffee in them. The sizes typically range from under 1, to over 20 liters.

As for the pros and cons of nitro coffee in BIBs verses nitro coffee in kegs, each container has its advantages and disadvantages. Most of the BIB coffee products that exist are created as concentrates. As such the product must be reconstituted by adding dilution water to bring it to the final strength ratio. This can be anywhere from a 1 :1 ratio to a 16:1 ratio of concentrate to water. The machines that dispense these products are designed to have a potable water supply plumbed to the machine. One pain-point to this dilution step is that the resulting beverage can pick up any off-flavors, such as chlorine, from the water supply. Also, the potential exists for concentration (brew strength) irregularities at the dispenser.

By comparison, coffee dispensed from a keg usually tastes better because the beverage is delivered in its final state, ready-to-drink. Similar to beer or wine, coffee in a keg is made as the master intended it and it doesn’t require any dilution at the service point. Also, since a keg is a rigid pressure vessel, it can be pressurized and pushed with Nitrogen gas and does not required a beverage pump to dispense it. 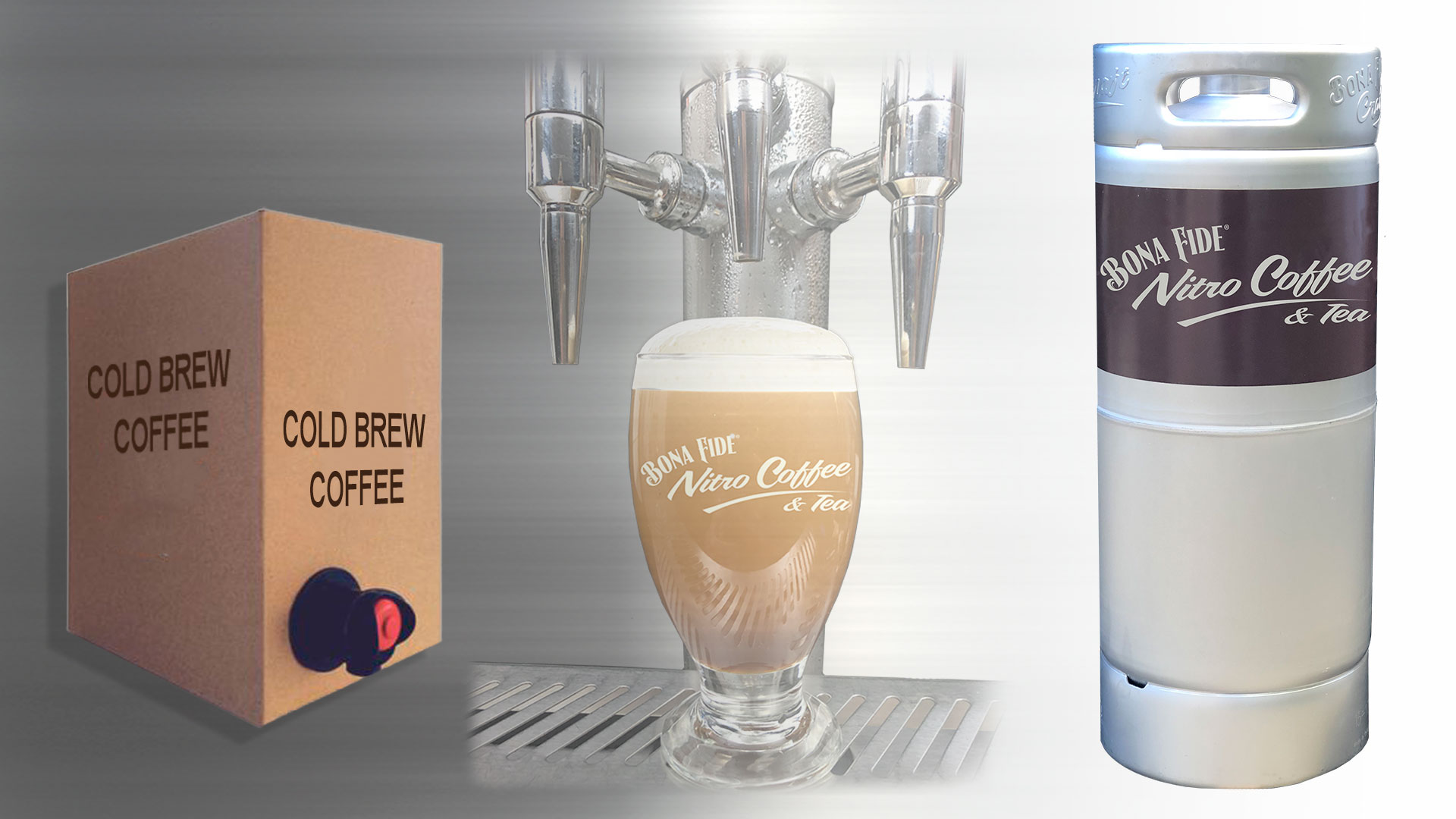 When it comes to storage and handling, one advantage that bag-in-box concentrates have is they take less storage space and are easier to transport. This is because much of the final beverage volume comes from  the dilution water added at the dispense point. This is often easier than the handling of kegs. However, as we already mentioned bag-in-box coffee usually requires a more complex dispensing solution to dilute and mix it properly and additional steps are necessary for making Nitro Coffee from. Since the BIB container can not be pre-nitrogenated and pressurized, a nitrogen infuser that injects nitrogen gas into the coffee at the dispense point is still required.

Contrast that with nitro cold brew coffee in a keg. The product is finished and complete. No further preparation or dilution steps are required.  Bona Fide manufactures its nitro coffee kegs fully nitrogenated. No post infusion is needed in order to pour beautiful nitro coffee on tap. Just hook-up the keg and start serving. It can be poured, either hot or cold, from a simple countertop dispenser. Moreover, BIK (bag-in-keg) type kegs don’t even require compressed nitrogen to pour them. They can be pressurized with any available gas, including air, since the bag inside the keg protects the product from interacting with the propellant gas.

Some may ask, can people who currently use bag-in-box coffee easily switch to coffee from a keg? The answer is yes, in many instances! With some simple adapters users can usually switch from a BIB system to a keg system. Two known exceptions could be the Bunn Nitron and the Cornelius, Nitro Coffee machines. Both use a unique container package design, keyed to that type of machine. They use a similar system to the reconstituted juice machines often seen at cafeterias.

However, if you use a kegerator, or a countertop draft dispenser with a delivery pump to dispense product from a BIB container, Bona Fide has compatible  products that will fit. For example, our BIK (bag-in-keg) mentioned earlier, is compatible with delivery pump systems used for BIBs. In most cases, only a few fitting changes are required to be pouring from a keg in a matter of minutes. Also, If the BIB system has a dilution feature for pouring concentrates, it may be possible to shut that feature off so that it direct dispenses the product at full strength.

Finally, if the dispenser in question has an inline nitrogen infuser, it can still be utilized and may only need to be readjusted to infuse the coffee correctly.