Greetings, I'm John Goerke, founder, and CEO of Bona Fide Nitro Coffee and Tea. I am a nitro coffee expert and have been a coffee entrepreneur since 1986.

With so much attention to cold brew and draft coffee on tap, that is - coffee poured from a beer tap, many people have already embraced the top of the trend, NITRO COFFEE which looks like a sophisticated draft beer, but tastes like silky smooth cold coffee.

If you are a coffee fan, it's likely that you have at least heard the term “nitro” or possibly even tasted nitro coffee at a coffee bar, or even at the coffee room at your workplace.

But after the bubbles settle and the caffeine kicks in, some still ask WHAT IS NITRO COFFEE?

In short, NITRO COFFEE is coffee infused with nitrogen gas (N2). The nitrogen is literally dissolved into the liquid coffee, under pressure, similar to the way carbon dioxide is infused into soft drinks and sparkling water.

The actual physics that allows this to happen is based in part on Henry’s Law, which is one of the scientific Gas Laws that explain the solubility of gas into a liquid.

There are a few ways to push N2 gas into the coffee.
One is to pressurize cold coffee in a keg to approximately 45 PSI (3 bars) of pressured and hold it for an extended time. Some agitation makes this happen faster.

A second method is to infuse the coffee with pressurized nitrogen using an infuser device, midstream, as the coffee is dispensed. This method is similar to the way a soda fountain machine infuses carbon dioxide into root beer.

Nitrogen is a little different than CO2 and it takes higher pressure to dissolve it into water-based liquids. The resulting bubbles are also finer which are what make nitrogenation so unique.

Once the nitro coffee is dispensed, it is effectively released out from under pressure, and it forms silky, microfine bubbles, which rise to the surface and create a beautiful, visual effect that is referred to as “the falling". Nothing is actually falling, but rather the bubbles rising cause the heavier particles in the beverage to be displaced and thus appear to be falling.

Not only is the visual effect of this phenomenon interesting to observe, but the effect of the microfine bubbles in the beverage on the palate is that it makes the beverage have a creamy mouthfeel which some equate to tasting softer or better than the same beverage would taste if it were still or flat.

Additionally, there is some science to support the idea that the nitrogen gas actually acts as a preservative as it displaces the oxygen in and around the beverage which helps to eliminate the natural but negative effects of oxidation. 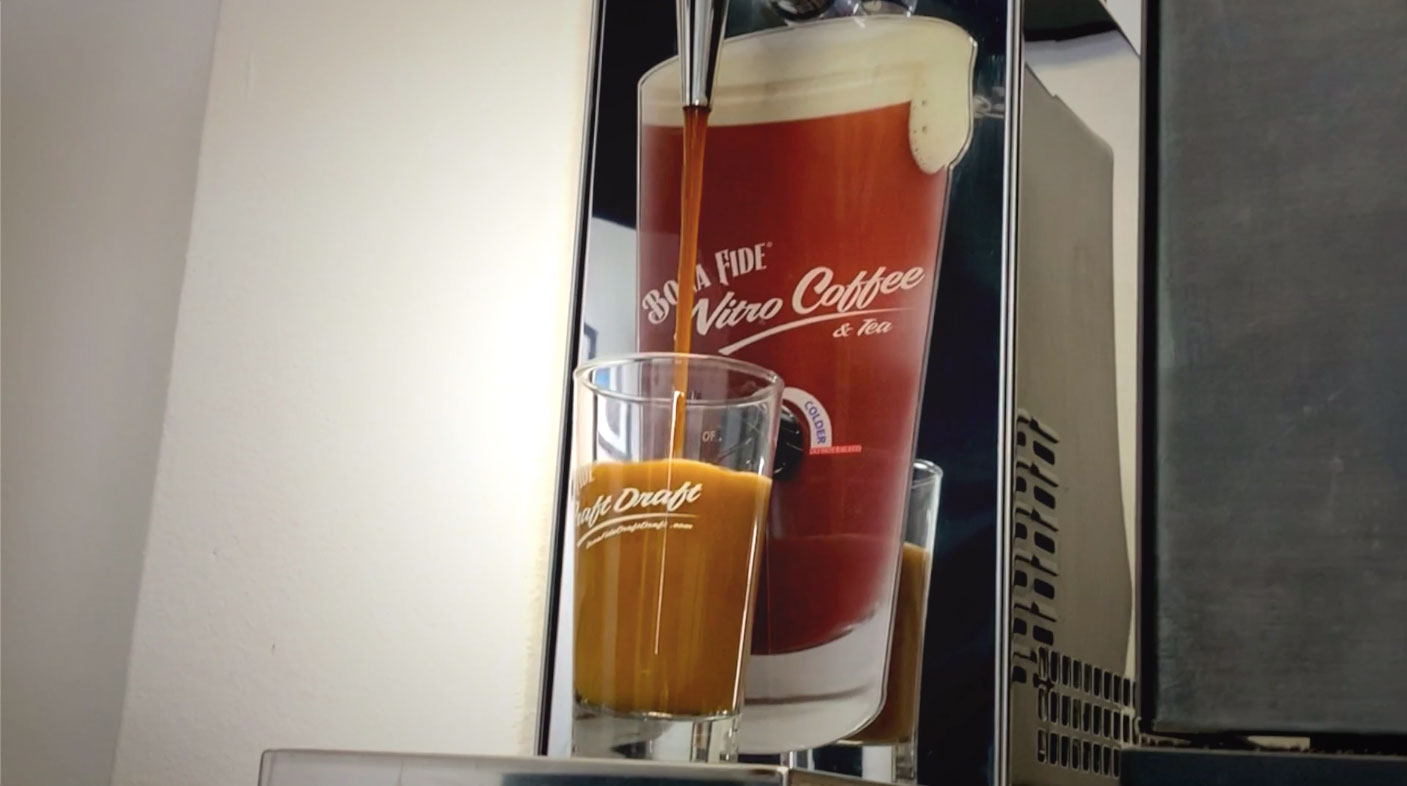 Whether you believe that nitro coffee is just another passing fad, or that it is the pinnacle of modern coffee evolution,
NITRO COFFEE is here to stay.

Analysts and foodies alike, consider it to be the fastest growing and most exciting segment of the coffee industry.

Whatever your opinion is, we encourage you to get to know nitro coffee and give it a try.

Try it out or ask for it at your favorite office or foodservice outlet.

Several companies exist who can help you navigate the many choices options and help you make the best suits your needs.

I am eager to provide you my assistance as well!